City College of San Francisco Librarian Rita Jones spearheaded a drive for endorsements from persons of fame and reputation. Even though “Information Power” served as the national motto, alerting to the nascent information revolution, the emphasis on books, on reading, and the library as a people’s university remained foremost in the sentiments of those whom Ms Jones entreated for support. 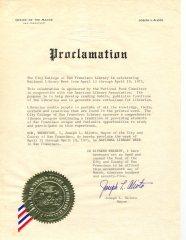 Thus, Mayor Joseph Alioto, in Proclamation: “Libraries enable people to partake of all the knowledge, facts, culture and tradition that are found in the printed word.”

Maya Angelou: “When a family or community, state, nation or species finds itself in perilous times, that body is most supported when it goes to its heroes, living or dead, for inspiration.”

Willie Brown: “The City College Library and the San Francisco Public Library represent, in fact, a free university…particularly for low income individuals. A library is one of the resources that I have used to make my case in the classroom, the courtroom and on the floor of the Legislature.”

Shirley Chisolm: “To succeed…you must be able to read and comprehend and to express yourself…Books are the keys to a World of excitement and enlightenment!”

Frances Ford Coppola: “Success and fame mean being able to bring about the things that you dream about.”

Ethel Crockett, California State Librarian: “What a fine idea you have to highlight the library during National Library Week.” Evan as “Libraries … are in the maelstrom of change, adding new dimensions as they respond to our need … for both information and pleasure.”

Bing Crosby: “I am deeply concerned over the fact that very few of our young people are inclined to do a great deal of reading. They rather watch television, and I think they are losing a great deal by this inclination.”

Mervyn Dymally, Lieutenant Governor: “The unemployed and the millionaire all have the same access to our public libraries.”

Marge Fong Eu, Secretary of State: “The library is ‘the people’s university’… In the library, complete equality of opportunity is a reality. I encourage all … to explore the treasures…”

Jose Feliciano: “Although my reading is limited by what has been translated into Braille, I do try to read a bit of everything and I have quite a library.”